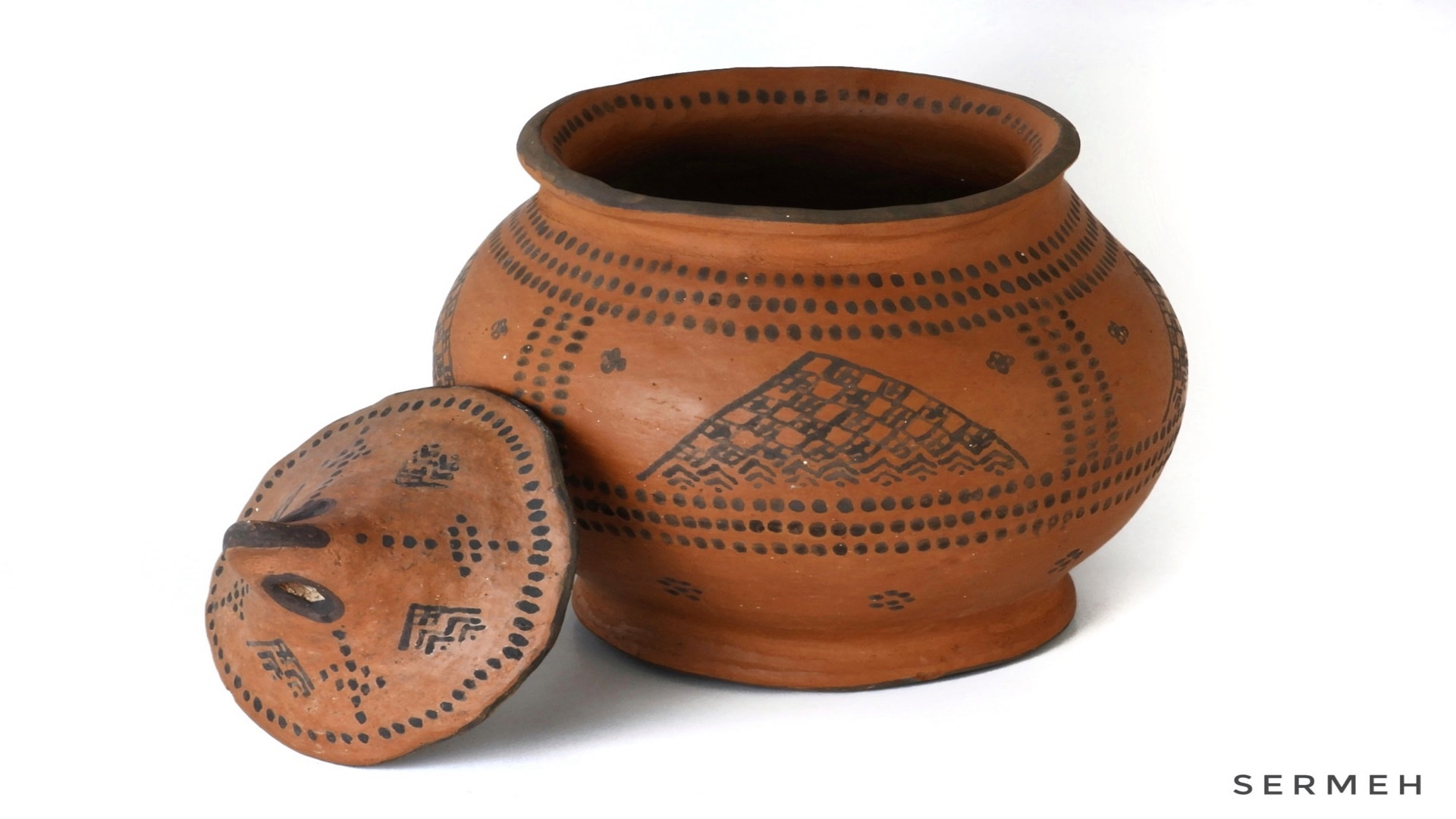 Among local crafts, pottery is of particular significance. Pottery is immortal in nature and stays well with time. Local ceramics are created to suit the needs of the environment and incorporate indigenous and cultural components. This article examines the indigenous pottery of Sistan and Baluchestan province, Kalpourgan Saravan. Nowadays, in the village of Kalpourgan, in the Southeastern part of Sistan and Baluchistan province, near Pakistan, 390 kilometers South of Zahedan and 26 kilometers Southeast of Saravan, the art of pottery is performed by women from the Dehwari tribe. These women potters make pottery with their powerful hands and creative minds and work as a co-operative in the field of pottery in Kalpourgan.

Pottery in the village of Kalpourgan in Saravan city of Sistan and Baluchistan is 5,000 years old. The women potters and girls of this village inherited this art in a traditional way from their ancestors; they create the kind of pottery which is both functional for the Baluch people, and has given the village of Kalpourgan a particular identity of its own. The pottery of this region bears close resemblance to its primitive origins, especially to the pottery which dates back to the third millennium BC, excavated through drilling in various parts of Sistan and Baluchistan. Kalpourgan pottery artists link Iranian history with today’s pottery. In a book titled An Overview of Iranian Crafts, Jay Kellogg mentions the three oldest areas where pottery immerged: Northern Thailand, Sistan and Baluchistan, and Japan.

The Kalpourgan women potters, in collaboration with the village men, take their required soil from a site called Meshkotak, 2 kilometers away from the village, and turn the clay to mud and make pottery out of the mud on their own. The method of making pottery is quite basic without the use of a pottery wheel. Pottery techniques in this area of Sistan and Baluchistan are rudimentary using traditional coiling , flattening or pinching techniques.

Engraving on this pottery is done using a stone powder called Titok. The Kalpourgan potters obtain Titok from Mount Birak near the town of Zaboli. It is a kind of manganese stone and the color that comes out of it is brown. The way it works is by grinding the stone into slurry. They are then used for decorating the pottery.

Rural women potters still create pottery using coiling (or locally called “couple”) technique, and without the need for glaze, they decorate the pottery using motifs inspired by thousands of years of beliefs. All pottery is then exposed to sunlight for ten days to dry. The clay pots are colored with Titok before going into the oven, and then the dish and the paint are baked simultaneously. In Kalpourgan the stoves are quite rudimentary, they are open and use wood as fuel. The firewood is obtained from old trees and desert shrubs. Nowadays [some of] these furnaces have been upgraded and are using oil and are situated indoors.

The particular type of pottery produced in the village of Kalpourgan is significant in terms of shape and color. The color of the ceramics is light red; the higher the heat applied to the iron-containing ceramics, the brighter the color will be. Kalpourgan pottery are usually vessels for everyday use including pitchers, food containers, pots, bowls, plates, statues, and toys. The thickness of this pottery ranges from half to one and a half centimeters, depending on the use and the size of the containers. Standing forms are more common in this type of pottery.

Kalpourgan potters unique works’ are decorated using simple and geometric motifs inspired by their beliefs and Baluchistan nature. Features such as simple and practical forms, not using glaze and using natural raw materials and elementary designs add to the potential of this pottery village in the south-east of the country, with significant implications. Visual elements such as rhythm, symmetry, repetition, equilibrium, and motion have a great influence on the formation of pottery motifs; they contribute to the structural coherence of the motifs and form them into harmony at some point and diffusion in some other.

The use of broken angular lines in the creation of motifs such as wheat and bullock clusters along with the curved and circular forms for motifs such as Teku Gilo, Kobel, Chottal and Sarok adds to the beauty of the art work. Most motifs are formed and transformed while moving on the surface of the pottery, creating new images, sometimes two motifs are combined to create a novel design. The inspiration for the motifs is the nature of Baluchistan, the plants, animals and beliefs of the Baluch people. The use of the circular form in the designs of the Kalpourgan pottery can be attributed to the feminine spirit of the artists who create these images.

The forms of these vessels follow a structured and stable pattern, but the primitive techniques of production give a sense of individuality to each work, an individuality which is, at the same time, following a structural unity. The motifs decorating Kalpourgan pottery, along with the shape of the vessels and their function, is considered as an important feature. The simple geometric, abstract, and cryptic expression of the motifs on these vessels depicts the simplicity of a primitive nature; these features have made Kalpourgan the living pottery museum of Iran.