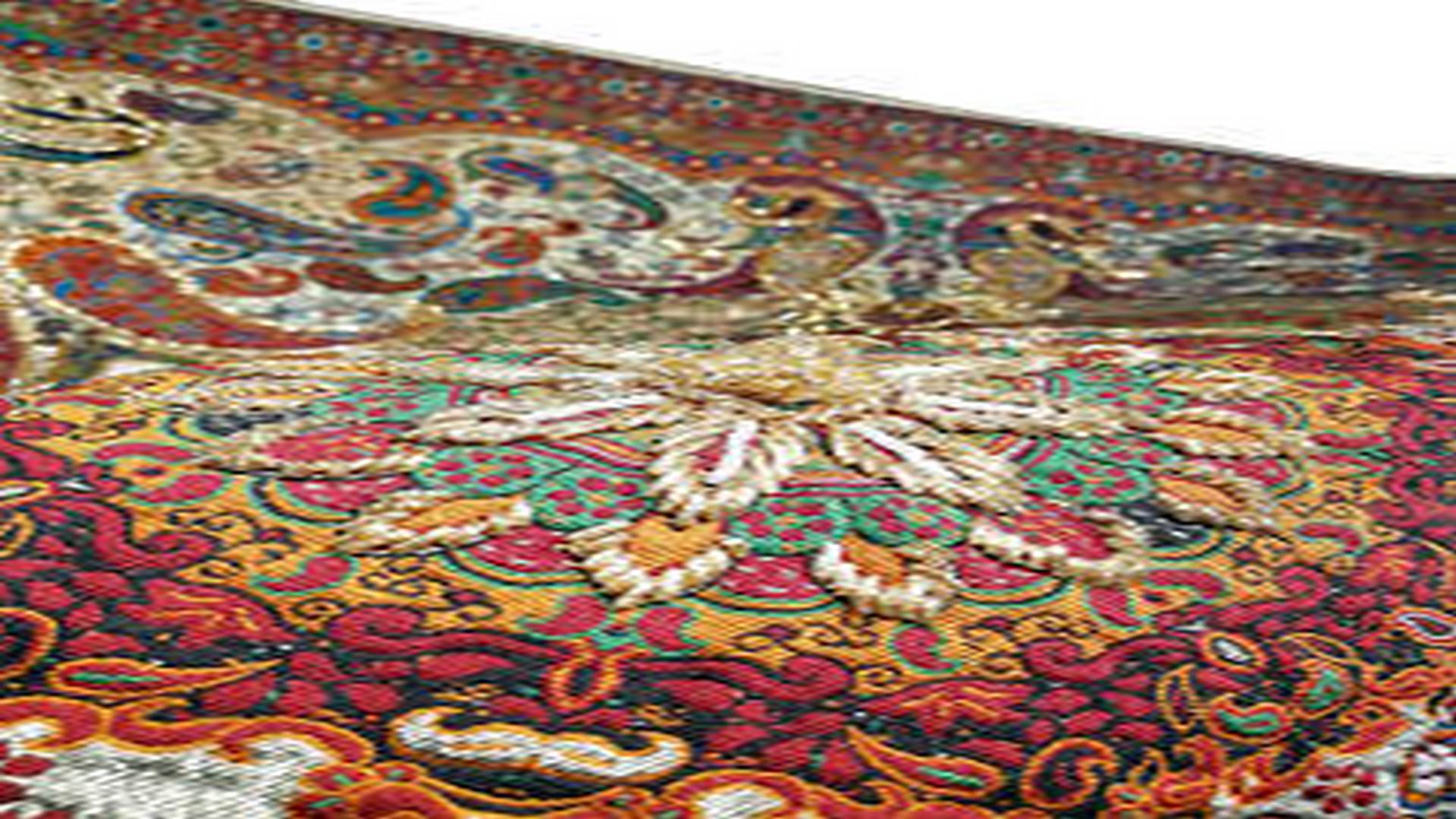 Iranians have always been an art-loving people throughout the history. In every corner of this land, artists have created amazing artifacts; they have created new images rising from the depth of their hearts to amaze the viewer.(Sermeh Embroidery)

From north to south of the country, people of different region have selected their particular art based on what has been available to them in their surroundings. In some places with the help of the branches of Judas tree, or the tree of love as it is called in Iran, people weave baskets. Elsewhere the palm tree is cut down and made into artifacts; even stones and shells are used to give shape to people’s stories.

These artistic landscapes have such variety that one needs a life time to know each well. Here we are going to have a look at one of these marvels which might even now be sitting at your place and adding beauty to the surroundings.

There are many artists round Iran working on creating stunning images on fabric. Sermeh Embroidery is one of the many kinds of such art in which, using metal filigree, a particular pattern is sewn on valuable fabric such as Termeh. Sermeh Embroidery art is also known as Termeh Work or Malileh Work.

This art has evolved and gained its present form throughout the history of Iran. It can be very impressive in the hands of artists from the cities of Isfahan, Tehran, Bandar Abbas, Kashan, Yazd and Hormozgan provinces and part of Kurdistan and Qazvin provinces and is considered one of the especial handicrafts of these regions.

The history of this art is not clearly documented; however, the importance of collar decoration and military and court uniforms adornments and decoration of flags could have evoked an interest in Iranians to think of producing such kind of ornamented fabric during the Parthians era; this art is thus estimated to be between 2500 to 3000 years old.

Sermeh embroidery is believed to have originated in the Achaemenid era. It is said that the decorative stitching, especially the embroidered and elaborate fabrics, astonished Alexander at the time he attacked Iran. Traces of Sermeh springs with silver and gold pieces which appear as hollow wires have remained from that period.

During the Parthian Empire, decorative sewing is known to have been an export commodity and played an important role in the Iranian economy.

This art is later traced in the Sassanid period as well. At the dawn of Islam in Iran the use of embroidery could be seen in the production of curtains for the House of God in Mecca. There are short suras or verses from the Holy Qur’an sewn in different styles of writing (moaghegh, Reyhan, Thilas, Naskh, Raqqa) on fabrics using Sermeh embroidery. On these inscriptions, thick laces are first sewn on the fabric and then adorned with Sermeh embroideries and other designs.

The curtain of the House of God at the Museum of Ancient Iran in Tehran, reminiscent of the Timurid era, is one of the historical examples of such work in which various other kinds of embroideries are also found.

The glory of this art continues to shine throughout the Islamic era, and reaches its peak in the Safavid era. The magnificent display of one such curtain at the Iranian Museum of Fine Arts illustrates the evolution of this art in this period. The curtain has been designed and decorated with an animal altar and embroidered rosewood, and Sermeh embroidery is also used on this curtain. In the period of Afshariyya, Zandiyah and Qajar and even today we witness changes in this art through the art work remaining from those times.

Malileh Embroidery, one type of Sermeh embroidery, has various patterns and designs sewn on fabric, such as varieties of flower and tree patterns, cedar trees particularly, paisley patterns, beasts, amethyst flowers, almond flowers, animal and human motifs, peacocks, owls, grape clusters, all kinds of fruits, stars, and inscription and a variety of calligraphic hands. Even though Sermeh Embroidery is not restricted to any design, yet the design implementation needs great care. To adorn this art in a more elegant manner a combination of other types of embroidery might as well be used. In such cases gem stones, filigree, pearl and other material might also be used. There are also other types of sewing which are used in Sermeh embroidery, such as chain sewing, Embroidery of leaves and twigs and stems, spiral sewing, Satin Sewing, Diagonal Sewing, Embroidery stitch, Embroidery clasp, and different types of zigzags.

Sermeh yarn, sewing thread, needles, scissors, bow machines or frames to hold the fabric, and cotton wick or any other filler are the tools with which a Sermeh artist sews his or her anecdotes on fabric. Small pearls, beads and sequins are also used in Sermeh embroidery in some cases.

Initially, all Sermeh yarns were made of gold and silver, but were replaced later with fake gold and silver because of the cost. Sermeh embroidery yarn is a tight thread twisted in the form of a tube or a flat, rigid and at the same time flexible rectangular square using fine gold or silver or alloys. Due to its elasticity, this yarn can take many forms. What is available as Sermeh yarn in today’s Iranian markets is a fine, long spring that is cut into certain lengths; the sewing is done by passing the needle and a cotton thread through this spring and attaching it to the fabric. Diamond Sermeh (Sun Shine), Gold and silver Sermeh, plain and thick Sermeh and French Sermeh are among the available types of Sermeh yarns in Iran.

Termeh is one of the common fabrics used for Sermeh embroidery. The reason for this choice is the widespread use of this fabric for garments in the Safavid and Qajar periods and its longevity. In addition, the thickness and strength of this fabric is a key factor in Sermeh embroidery. The fabric used for this art should stay firm when the crochet is finished and wrinkles should not be seen on the surface. This only happens when the fabric is thick enough. For fabrics which are not thick enough, sewing the fabric to another piece of cloth adds the required thickness. The fabric on which the embroidery is applied can be made of velvet, flax, mahogany, silk, taffeta, and satin. However, Termeh is still a popular one in this case.

Lastly, to do Sermeh embroidery, the bow machine is also needed. It is a wooden device that holds the fabric firmly in place. Its modern form is a circular arc and its traditional type is in rectangular shape. This rectangle type can only be made by ordering; its arched shaped one is available at tailor shops.

To create this artwork, the artist first draws the desired pattern on the paper and then transfers it to the fabric either by turning method or using a sewing soap or any other pen whose trace stays on fabric. Before sewing the design, the fabric is placed in the bow machine and is drawn from all sides. The lines are fixed with coarse stitches first to ensure that the pattern is not worn off during the embroidery. Then, using cotton wick or silk, lines are made to stand out of the fabric and then they are fastened with fine adhesives to the background. In the next step, a strand of Sermeh is cut to the desired size from among batches of 5 to 25cm. This should be done with utmost care so that Sermeh yarn does not get stuck when cutting the headband or the entire strand will go loose.

Lastly by inserting the needle and thread into the Sermeh spring-like yarn. The lines of the design which are already fixed on the fabric and filled with cotton wick or silk are completely covered by Sermeh. To sew large leaf designs, the leaf shape is divided into two parts by length, and each part is worked on separately. The stems are sewn using a different technique called stem embroidery.