Lalejin Pottery, the Magic of Water, Dust and Color 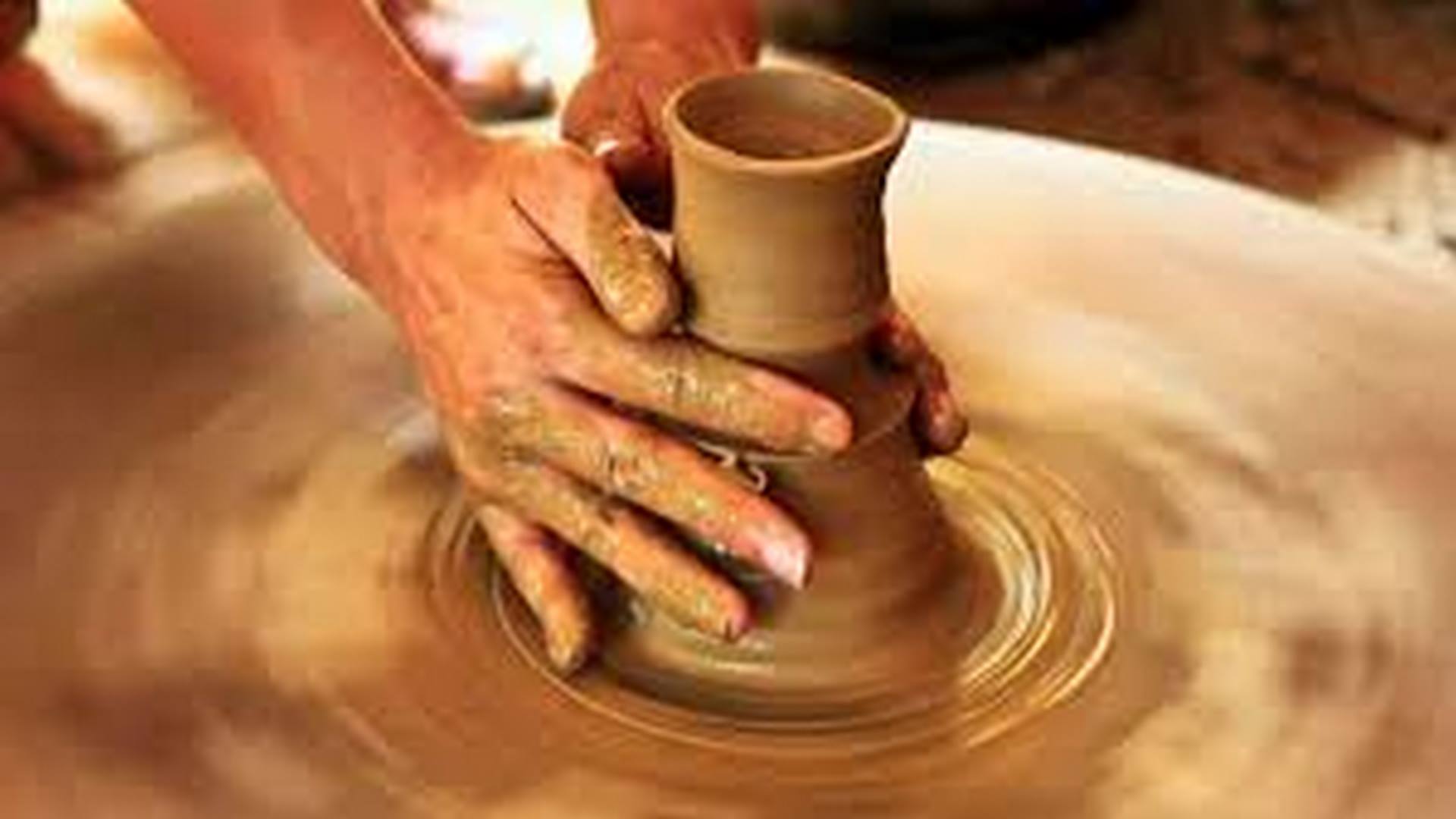 Handmade Pottery and Ceramics of Lalejin

Pottery is the fine art of forming vessels and other objects with clay. Pottery vessels might be the oldest handmade craft in the world. In different regions of Iran the art of pottery exists in various forms.Handmade Pottery and Ceramics of Lalejin

Pottery urns and bowls are some of the oldest forms of pottery making in the world. Before glass was made, pottery jars and vessels were commonly used in everyday life. The best pottery is made of clay which is red in color because it is rich in iron.

Even though pottery is an ancient technique, yet with time it has not lost its allure; it has developed into different forms and has adapted itself to modern human needs.  Throughout time it has been decorated in many different ways and this has doubled its charm.

In Iran and in many other countries in the world pottery is still very much alive. In different regions people have their own particular methods and raw materials for forming and decorating pottery vessels. Even though the material and the techniques might have minute differences, still these tiny peculiarities make the pottery of each region stand out from the rest.

Pottery is the first handmade craft and is the answer to human’s needs and a manifestation of their capabilities in profiting from nature to answer their needs. Since the raw material for making pottery vessels- clay, water and fire could be found almost anywhere human beings lived. Also the remnants of this ancient art can be found almost everywhere as well.  The oldest potteries in Iran were found in Ganjdarreh area of Kermanshah Province and they date back to eight thousand years before Christ.

Lalejin is a town in Baharestan zone of Hamedan Province and is known as the pottery capital of the Mid East. Eighty percent of Lalejin residents have some background in pottery, ceramic or other techniques related to pottery making; such as decorating or selling pottery.

Lalejin is considered one of the most well-known ceramic and pottery making centers in Iran and in the world. Pottery from this city is exported to other regions of Iran and also abroad. The potteries made in Lalejin are in various forms. They include common vessels for everyday use or those for decoration. According to data from 2006, there were 683 pottery workshops in Lalejin till then. In recent years because of decrease in demand and difficulty in making pottery, also the fact that pottery vessels are not commonly used in everyday life any more, some types of pottery making are becoming extinct.

Some artists in Lalejin work on painting and decorating pottery. Painting on pottery is done in two methods:

a) With plastic and oil paint

b) With mineral pigments that are stabilized through firing the pottery in pottery kiln. Painting with firing colors is done in different ways, such as over-glazed and under-glazed decoration.

In recent years there has been a new way of decoration called Vitreous enamel, also called porcelain enamel.

Today’s artists pay more attention to the artistic side of their handicraft.Handmade Pottery and Ceramics of Lalejin

The clay is brought from lands outside Dastjerd village either to pottery workshops or other places where the clay body is prepared.

The raw clay has chunks and rocks. These are pounded into powder either manually, using shovels or using electric devices. The soft clay is then transferred to huge vessels or barrels and is mixed with water until it turns into a muddy form. Then this mud is sieved and the sieved mud is poured into a pond of about thirty centimeters deep. The mud is put away for a few days so that it hardens a bit. At this point the mud is cut into bricks and the bricks are transferred to pottery workshops and are stored in a special room. Some of the soft clay is also saved to be used for clay kneading.

One or two people chop down the whole mound of clay into big pieces using cut-off wires or a sickle and then start the foot wedging process. They go on with this until the entire mound of clay is done, which might take a few days. Then they chop the clay into smaller pieces and knead them with hands and shape them into small cones. These small clay cones are called “chooneh”. This is the clay body ready for forming into pottery vessels.

Tools Of Handmade Pottery and Ceramics of Lalejin

This is a flat piece of stone. The size is about one meter in one meter and a half. This piece of stone is held by the right or the left hand and is used for kneading the clay with hands. The clay sticking to the stone is removed every once in a while using fettling knives or what in Farsi is called “Kar-Tarash”.

To the right of the potter, in a small pit near the machine, a bowl of ceramic is placed and is filled with water. When working, the potter wipes his/her hands using this water so that the clay does not stick to his/her hands and the pottery work is done more easily.

These long heavy needles (six centimeters) set into short wooden handles (four centimeters) are used for neatly trimming the top edges of pieces while they’re on the wheel and for scoring slabs and coils when you’re hand-building pieces.

Timaj means goatskin in Farsi. This tool can help shape and smooth pots as they are being formed on the wheel. The potter holds this piece of leather with two fingers and shapes and levels the edge of the vessels moving on the wheel. Today the bicycle tire is used for this job.

These are usually made of thin copper pieces. The size is about 8 in 5 centimeters and is in the form a triangle with curved corners. This tool is used to make the outer part of the vessel smooth while the pot is on the wheel.

This tool is used to scrape the bottom of the vessel. The potter can choose different sizes of scraper depending on the size of the vessel.

Potter’s wheel is a machine used in the shaping (known as throwing) of round ceramic ware. It is made of several pieces and is placed inside a container usually made of clay, which looks like a table with one side open. The recent models are made of iron and are portable.

The potter sits on a bench at this table and starts throwing the clay on the wheel.

Pottery bats are removable discs, of varying size and material that easily attach to the pottery wheel head and is mostly used for bigger size pots (size of a normal vase). The pottery bat allows the potter to throw the clay on the pottery bat, and not directly on the wheel head and therefore makes the removing of the pot much easier because the potter simply removes the bat and does not have to separate the wet clay from the wheel using the wire. A potter must have several of these bats since for each pot a different bat is used.

This is a wooden board of about 30 in 40 centimeters and is used for carrying small pots.

Then the potter starts moving both their hands upwards on both sides of the body and thus throws the pot into the form s/he desires. In order to open the clay, the potter needs to lay the left thumb across the top (through the center axis) and push down on the left thumb. The potter needs to keep the right hand always on the clay and lubricate it all the while. When the clay is formed into the desired shape, ribs and scrapers are used to smooth the shape and the needle and the leather piece are used to form the edge of the pot. Then the pottery bat is removed and is placed in a roofed area. It takes about twelve hours for the pottery to dry to some extent. At this stage decoration can be carved on the surface of the pot.

After carving the decorative motifs the pot is put away from the Sun for twenty four hour and then it is put in the Sun so that it is bone-dry.  Then the pot is placed in the kiln with utmost care and after it is fired for the first time, it is glazed and then fired agan.

Pottery kiln is made of bricks traditionally and has two parts: the lower part which houses the big iron torch and the upper part where the pots are placed on shelves.Handmade Pottery and Ceramics of Lalejin

Before the kiln is lit, the master goes into the kiln and the students give him/her the glazed pottery one by one and s/he puts them on the ledge. The master places the pottery so that those which are black are closer to the fire and those which are yellow are further from it. S/he also makes sure that the pots are well spaced apart because if they stick together, they will not break apart after heating. In order for the pots not to stick to each other, a device called a three-pod is used. Three-pods come in various shapes depending on the shapes of the vessels. Since the trace of the three-pod stays at the bottom of the vessels, the vessels are placed in a bigger pot and then put on the three-pod. This bigger pod is not glazed because the glaze will stick to the pottery. The bottom of the vessels has no glaze either.

After the kiln is loaded, the heating rises slowly and gradually. After ten hours, the master inserts a stick into the kiln, the heat flares the stick and thus the master can see inside the kiln. If the glaze is bright and “mature”, the master considers the job done. If not, s/he raises the heat. Paying careful attention to heating is very important, otherwise the pottery is damaged. Firing the vessels takes about ten twelve to fourteen hours, then the kiln is turned off and the hatch on top of the kiln is left open for about twenty four hours to let it cool down. Lalejin potters make plates, trays, salt shakers, ash trays, cups, jars, gray pots, different types of pots and also lanjin. Lanjin is bigger than a plate and it needs to be light, so they add straw to clay when making it and also it is glazed when it is still not fired. Gravy pots and water jars are never glazed. Jars used for making jams, vinegar and pickles are glazed inside.

Making Glaze in Handmade Pottery and Ceramics of Lalejin

Years ago, Laljin potters mixed about fifty kilos of alkali (derived from the burning of the ushnan plant) with about 2 kilos of flint and boiled it up to about a thousand temperatures to form a kind of glass (silicate). This solution was then crushed and milled, and twenty kilograms of it was mixed with eighteen kilograms of flint and ten kilograms of crystals. This mixture was called one psa and was used to make all kinds of glazes.